A recent act of mercy by a daring hunter was caught on video, as the man risks it all in order to free a mountain lion that had mistakenly gotten caught in a trap. In the desert wilderness of Helper, Utah, the man can be seen approaching a mountain lion, also known as cougars, who had mistakenly gotten its foot stuck in a trap that had been laid for bobcats and coyotes.

The latter two animals are two predators that are more likely to attack passersby, which has seen them become a popular prize in recent years. Mountain lions, on the other hand, are territorial creatures that have a much lower probability of attacking, humans.

As the lion struggled in pain to free its paw, it began to panic, screaming and clawing the ground, in an attempt to wrench itself free. Dust clouded around the animal as its thrashing kicked up the desert dust, who was ultimately thrown to the ground.

The man approached the alarmed animal with a noose on a pole, in order to hopefully control its movements should his attempt to help provoke an attack. As he hooked the lion, his efforts seem to go unappreciated, but the fearless hunter presses on with his rescue attempt. He inched behind the lion, approaching the trap mechanism in order to release the trapped paw. 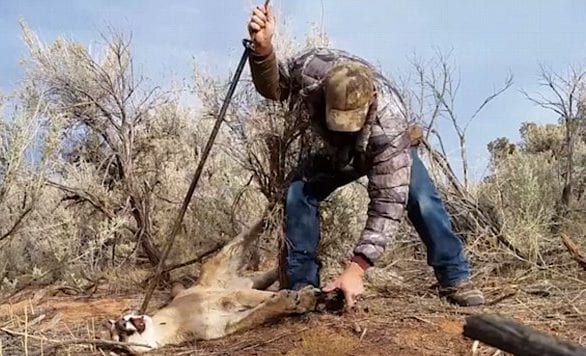 The lion laid on the ground in defeat, nervously eyed the hunter, who reached the trap, and released the mechanism with his foot. He then had to get down on the ground in order to manually remove the large cat’s paw from the trap. Meanwhile, he still has a tight hold on the noose keeping the animal at arm’s length, as the cat slowly recognizes that its paw has been freed. The man released the cat from his hold, and hurried to leave the scene.

America has proved that it is not a nation to be messed with as they now have 1,200 marines who are ...

Parents In Luck After Toddler Puts $1,000 Through Paper Shredder

No matter what you do to child-proof your home, toddlers are capable of just about anything. From ...