If you’re looking for new ways to celebrate Black History Month then look no further then Twitter’s new chatbot! On February 1st Blackbirds, which is Twitter’s black employee resource group, launched a chatbot which provides users with community-focused information, facts, and support about Black history month. All you have to do is DM the @Blackbirds account, and the bot will automatically greet you, allowing you choose from four preset categories: Today in #BlackHistory, #SelfCare, #ForTheCulture, and #ForTheCause. Users will be able to access this feature throughout the month of February. 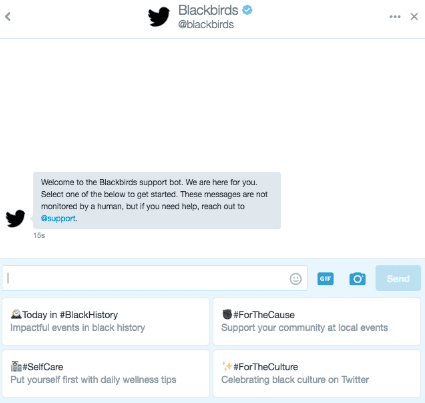 Shelby Williams, who is a brand planner on Twitter’s Brand Strategy Team and a member of Blackbirds said, “We recognize the incredible impact of black people and culture on our platform every day, so we wanted to contribute to that conversation in a meaningful way during Black History Month through this bot,”

Here’s a brief rundown of how the options work. Today in #BlackHistory shares one out of three facts about black history that are relevant to that particular day. #SelfCare shares simple self-care reminders and tips to help black community members focus on putting themselves first, especially in a socially and politically tense environment. #ForTheCulture highlights the best moments of notable black leaders, along with tweets from influential black voices. #ForTheCause spotlights community events which support the black communities in these five major cities: New York, Los Angeles San Francisco, Washington, D.C., and Chicago. 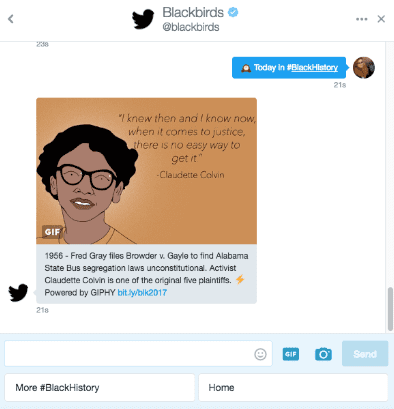 Regarding the motivation behind creating the chatbot Williams also said, “Self-love and community were big inspirations when we were building this chatbot, so we wanted to integrate them in a way that would be meaningful to users and allies alike.” In addition to the chatbot, Twitter also made a decision to relaunch the raised fist emoji which commonly accompany the #BHM and #BlackHistoryMonth hashtags.

“Whether we formally recognize it or not, [celebrating black history and culture] is not limited to February. In fact, this conversation is happening every day. But having this annual holiday allows us to take a pause to commemorate our past — and look forward to our future” William added.

Things are starting to heat up off the of the Korean Peninsula as growing US presence is being ...