Here’s a story to warm the coldest of hearts as temperatures begin to drop, involving an elderly man, a penguin, and a 5,000-mile journey undertaken twice a year. Joao Pereira de Souza, a 72-year-old former bricklayer and part-time fisherman, lives on an island outside of Rio de Janeiro, Brazil. In 2011, Joao found a small penguin covered in oil on the rocks of a beach by his home.

He promptly took him in, cleaned the oil off the feathers, fed him fish, and befriended him. Joao named his new pal Dindim. After several days, Joao tried to return him to the water, but the bird refused to leave. Joao said, “He stayed with me for 11 months and then, just after he changed his coat with new feathers, he disappeared.” 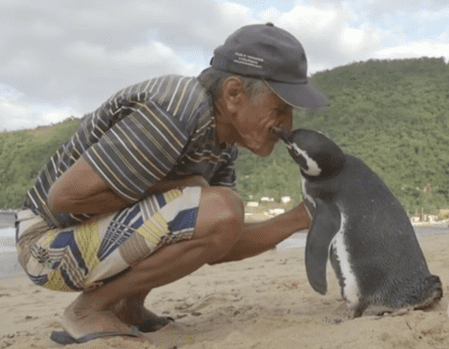 It only took several months before Dindim came back, following Joao home after seeing him at the beach. Every year since then, Dindim has spent eight consecutive months with his best friend before setting off. It is believed that he spends the rest of the year mating off the Chilean and Argentinian coasts. This means that every year, Dindim swims a whopping 5,000 miles, just to be with Joao!

“I love the penguin like it’s my own child and I believe the penguin loves me,” he told Brazilian TV a couple of years ago. “No one else is allowed to touch him. He pecks them if they do. He lays on my lap, lets me give him showers, allows me to feed him sardines and to pick him up.” Even though “everyone said he wouldn’t return,” Joao said, “he has been coming back to visit me…” 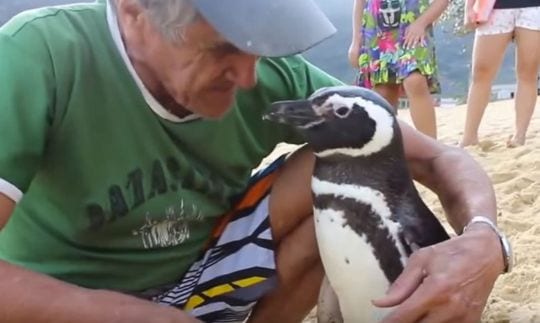 Professor Joao Paulo Krajewski, a biologist, said, “I have never seen anything like this before. I think the penguin believes Joao is part of his family and probably a penguin as well. When he sees him he wags his tail like a dog and honks with delight.”

As of last week, Scotland became the first country in the world to make period products, like pads ...

According to health officials, an avian flu in China is threatening to cause a global pandemic, ...